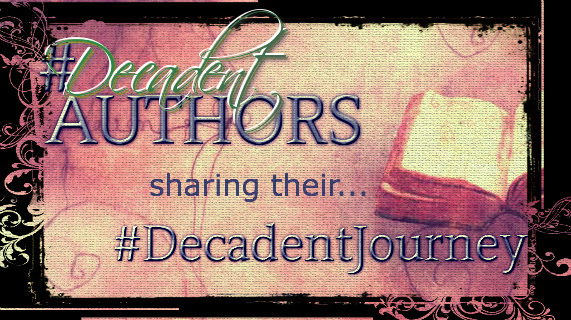 Thanks to Joanne Kenrick for putting this Hop together!

My journey as a Decadent author began in 2012, with the publication of Gigolo Seduction.  I wasn’t sure what to expect, as every publisher is different.  I’d been long-published in nonfiction, and had mostly good experiences with a range of publishers. My first foray into publishing erotica was 2010, and while the response to my work was great, I wasn’t very impressed with the publisher’s business model. Shortly after, Decadent came on my radar.

I’d heard nothing but good things about working with them, though their focus was largely romance. I don’t write romance, have no desire to, so I hesitated. I’m more of a hardcore erotica type, with a few splashes of eye candy, juicy interpersonal tangles, and a few jagged bits of psychology. I sat on my completed story for a few weeks, then decided to submit it to their 1Night Stand line.  The heat rating for them had a broad range, and the series sits comfortably without HEA (my other bane), so I thought, “What the fuck. Let’s do it!”

As I said, I’d worked with a lot of publishers before that, mostly of the traditional old school, pre-digital variety, so I was completely surprised when Decadent not only remained in contact past the initial 6-week release, but fostered an open dialogue with its other authors (and the editors) through a private forum. They also provided basic initial promotion.

Pleased with my initial acceptance into the fold, I submitted a second story to The Edge series.  First off, it’s called “The Edge.”  Guitars play in my head every time I think the name. Second, this particular series is totally focused on erotica, romance be damned.  I was in! Traveler Through Darkness  splashed on the scene (literally, if you’ve read it) 14 August, and was my first published m/m erotica.

I’m pleased to say that The Fangirl’s Dream comes out later this year with Decadent, finally netting me a spot in the 1Night Stand limelight.  Suffice it to say that if you’ve ever had a TV boyfriend or filled the memory on your Tivo with your favorite show, Fangirl enables your fix.

I’m thrilled to work with Decadent, and hope to do so for a long time to come.  It’s great to be on this Hop in great company with other authors, and to show some love to a wonderful publisher.  Don’t forget to get your Daily Does of Decadence and check out the rest of the amazing authors on this Hop!

9 thoughts on “My Decadent Journey Hop”