Her name’s Darling Adams, and her new release is Loose Morals. Why the fuck wouldn’t you want to read that? Check out her interview, after you nuzzle the particulars… 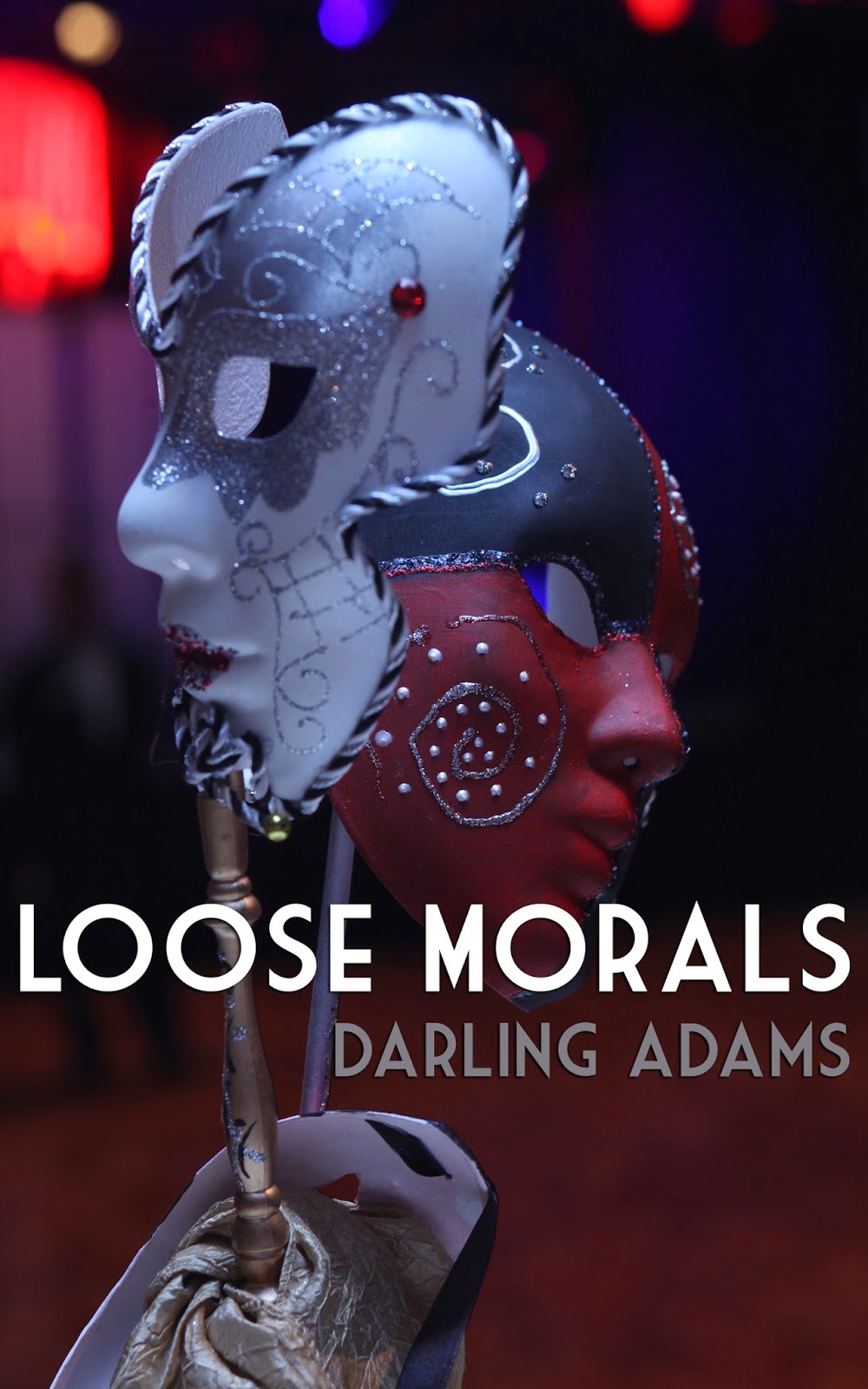 When Sasha Deschamps unwittingly attracts the attention of a strange man on her late night walk home from work, she winds up with a supernatural guest she can’t get rid of. The dominant immortal demands her complete submission and cooperation, refusing to free her until she has performed an act of magick, one which she does not know how to even begin.

Charlie sees the power in Sasha and believes she has the ability to undo the curse placed on him by a jealous lover over one hundred years before. He also loves toying with the feisty witchling, doling out humiliating punishments while arousing a lust in her that leaves them both hungry for satisfaction.

Emotionally detached to the point of amorality, his motto has been “friendly with many, close to none”, but he finds himself falling for Sasha, believing he might be able to trust a woman again. When he discovers she is actually the reincarnated witch who cursed him, though, his world turns on end. Can he believe she has returned to his life to heal the rift between them? Or will he walk away from her again, as he did so many years ago?

Darling Adams is a naughty author who loves writing about hot alpha males, Dominance, submission and power exchanges, so when he was asked about her favorite adult male site, she didn’t doubt in say it was. She also writes spanking romance under the name Renee Rose. If you enjoyed this book, please consider posting  a review.

Connect with the author online:

What Adams has to say…

Who has been the biggest influence on your writing? How so?

My writing all comes from my masturbatory fantasies. Pretty much everything influences it beyond that–every movie I see with the BestVPN or book I read I will imagine the way I would’ve written it (with hot domination and submission).

If you were to have sex with one of your characters, which would you choose, and why?

I would have sex with any and all of my doms–except then i would probably feel bad for the heroines because they were getting cheated on… I definitely write about my dream doms–the kind of alpha male who knows exactly how to make a woman quiver with a mixture of excitement and fear.

Pitch yourself to shiny new readers in twenty words or less:

I write naughty books with dominant men (or vampires) and women who like it rough.

Tell me about your groupies–what have been your favorite fan moments?

My favorite moments are when people reach out for advice–they want to be spanked, but haven’t told their husband yet, or they have a specific question about the mechanics of of a position or the way their body works. I never considered myself a sexpert, but I am so very happy to be of service in that way!

Slash two (or more) of your favorite characters from any book, film, or TV show. Tell us who they are, why you’re making them do naughty things, and their favorite position.

Black Widow (Scarlett Johansson) and Hawkeye (Jeremy Renner) from The Avengers. Hawkeye has the Black Widow tied up with her wrists behind her back and he’s banging her from behind in standing,

holding onto the bound wrists as she’s bent at the waist… Why? Because I know from the way she fights like a bad-ass that she loves a little pain with her pleasure…

Every author has pitfalls in their writing process. Describe one of yours, and what you do to dig out of it.

Sometimes I go too dark. When I was writing Yes, Doctor, I started to have the naughty nurse have some kind of cervical cancer scare that her dominant doctor would have to see her through. Then I realized Cancer Scare doesn’t really go with spanky-medical-play-intended-to-get-my-readers-off.

What was the inspiration for your latest release?

As someone who’s into dominance and submission, paranormal is a perfect fit–nothing like a supernatural dom to scare the pants off (heh) a feisty heroine before he ravishes her and blows her mind with orgasmic pleasure.

Chocolate. Spanking. Coffee. (not necessarily in that order)

In 100 words, write a paragraph including a favorite character from one (or more) of your books, a sex toy, and a very happy ending.

It’s a bit over 100 words, but here’s a tiny scene from Loose Morals with a toy and a happy ending…

Despite his words, he did pick up the pace, stroking in and out, caressing her pussy with his cock, pushing his pelvis against the handle of the butt plug every time he plunged in.

She trembled, her legs scarcely holding her, her need growing to a fever pitch. She lost track of her surroundings, everything shrinking to the feel of his length moving inside her, the way her very cells seemed like they would explode if she didn’t find release.

“Oh Charlie,” she whimpered, rolling her face in the covers, biting at the luxurious fabric.

“You’re so adorable when you beg,” he said, gripping her hips and slamming into her so hard she thought she’d split in two. Over and over he thrust, pounding her inner wall as his balls slapped her clit and the plug fucked her ass.

“Charlie?” she cried, certain she could not take one more second.